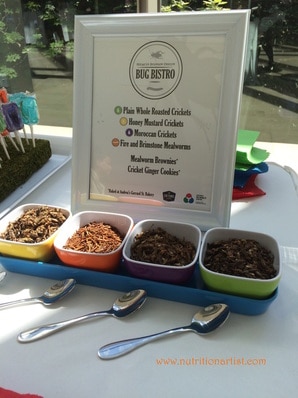 Thank you so much to our guest blogger, Michelle Jaelin RD, for this post! Michelle is an innovative registered dietitian based out of Toronto and Hamilton, ON helping you eat healthier through creative nutrition messages!

Working in the nutrition and food world, I often get the pleasure (and excitement) of learning about new foods and trends before they reach the public. A trend of 2016 has been the consumption of insects, such as mealworms, crickets, and beetles.

I got to try some of these at the Idea City Conference where the Ontario Science Centre and Entomo Farms teamed up to share these insect proteins to the knowledge-hungry audience at Idea City.
Now if you grew up on Disney like I did, you probably would think of Timon and Pumbaa from the Lion King, when they sing “Hakuna Matata” and explain the concept of eating insects to Simba.

If you are squeamish and the thought of consuming insects grosses you out, one of the easiest ways to try them is in powdered form. I received a sample to try from Entomo Farms. My initial impression was it resembled cocoa powder. A deep brown colour, except the taste was similar to that of mushrooms.

As someone who does enjoy baking, I decided to make cricket banana bread.
As a dietitian, I am always trying to tweak recipes to make them healthier. Here is my version:

Overall, I felt like the cricket powder gave the banana bread a greater depth of flavour with added protein over regular banana bread. If you would like to try consuming insects, cricket powder added to your traditional recipes in small amounts is a great way to try it!

Disclaimer: The following recipe was created from a PR sample sent from Entomo Farms – I was not compensated to write this post. All opinions are my own and are genuine.