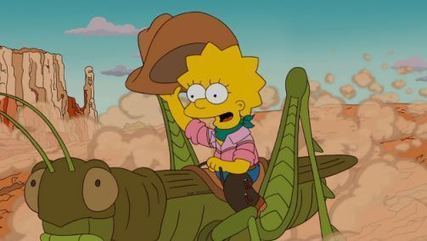 In Season 24, episode 5 of The Simpsons (Penny Wiseguys), Lisa Simpson joined theProtein Revolution, and turned to entomophagy because she was experiencing iron deficiency due to her vegetarian diet.

First of all, I love the fact that this episode aired back in 2012. That’s pretty cool.

Second of all, it touched on an interesting topic; vegetarianism and eating bugs.

I was a vegetarian for 18 years- from the time I watched a riveting episode of Donahue from a bazillion years ago, that featured River Phoenix and Lisa Bonet. I chose to be a vegetarian for many reasons; primarily because of cruelty to animals that was occurring in the industry.

I started eating meat during the pregnancy of my second child when I became so deficient in iron and specific vitamins, that I developed Pica, and had very strange olfactory cravings (like wanting to sniff white out and permanent markers- I was also craving BBQ chicken skin at 10:00 am.  My doctor advised to either start taking injections, or eat meat. I chose the latter, and have been still consuming meat protein to this day. And now, I also eat bugs.

So, my question is to you vegetarians out there.

As a vegetarian, how do you feel about eating bugs?